** My new Native American Young Adult, APPLE IN THE MIDDLE, is coming out Aug 2, 2018 from North Dakota State University Press in its Contemporary Voices of Indigenous People series!!! You can follow my book news on the "Dawn's Book Page" tab above.


APPLE IN THE MIDDLE is a coming-of-age novel and an unexpected look at what happens when two cultures collide and our only tour guide is a quirky and offbeat outcast. Apple is unique as it is the only humorous Native American coming-of-age story with a female main character to date. It's a little bit mystery, a bit of trip down adolescent lane, a bit self-discovery, and a whole lot of tears-from both laughter and sorrow. People of all ages remember their own coming-of-age (the painful awkward years) and will connect with Apple. 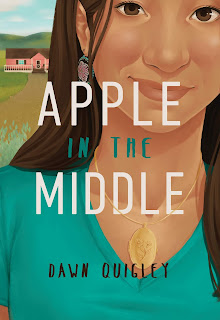 Apple Starkington turned her back on her Native American heritage the moment she was called a racial slur. Not that she really even knew HOW to be an Indian in the first place. Too bad the white world doesn't accept her either. So began her quirky habits to gain acceptance. Apple's name, chosen by her Indian mother on her deathbed, has a double meaning: treasured apple of my eye, but also the negative connotation: a person who is red, or Indian, on the outside, but white on the inside. After her wealthy [white] father gives her the boot one summer, Apple reluctantly agrees to visit her Native American relatives on the Turtle Mountain Indian Reservation in northern North Dakota for the first time, which should be easy," but it's not. "Apple shatters Indian stereotypes and learns what it means to find her place in a world divided by color.” This Young Adult novel—perfect for adults, too—is a work of complexity and compelling drama, mixed with humor.

Dawn Quigley notes: "Bouncing in the middle of multiple worlds myself (and being an enrolled member of the Turtle Mountain Band of Ojibwe, ND), I bring a true voice to a story that Native and non-Natives will connect to equally. Also, my APPLE IN THE MIDDLE echoes Midwest regional life directly in that coming-of-age novels are usually centered around boys/men. My book, written by a Native woman, refuses to quiet Indigenous stories, which are all too much marginalized and passed over by the literary world. My protagonist, Apple, realizes and awakens her strong center as she overcomes those who would define her, and what it means to be a Native teen, thereby challenging the way we read literature."

**It will be available SOON at your favorite Indie bookstore, Amazon, Barnes & Noble, and our online store. It's not listed there yet, but Apple will be able to be purchased even at our NDSU "Shop Now" site.
Posted by mn native reader at 12:50 PM 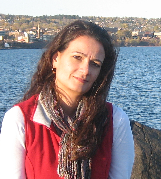 mn native reader
I am an assistant professor in the Education Department at St. Catherine University, St. Paul, MN (and an enrolled member of the Turtle Mountain Band of Ojibwe). You can reach me at: quig0099 @ umn.edu (take out spaces). Miigwetch! Thank you!